At the Car Wash 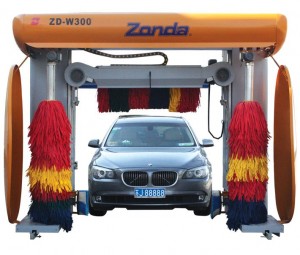 This past Sunday—August 24—marked one full month since we moved to Germany! The honeymoon phase hasn’t worn off yet, but there have been moments—like the time when we borrowed a car for three weeks while the owners were out of town on vacation. At the end of the three weeks, we went to get it washed before returning it and encountered a few surprises.

For one, it was an automated car wash machine at a gas station. Everything’s normal and I (Jeff) have done this dozens of times until we watch the driver ahead of us. He pulls into the machine, gets out of his car, puts the code in the key pad, and proceeds to stand there and watch as the machine washes his car. Not wrong, just different, right?

Then when I pulled the car around to the vacuum station I had to wait while the person ahead of me finished with the vacuum. Again, everything’s normal, right? The kicker came when some [insert polite adjective] person pulled in to the newly vacant spot while I was putting the car in gear. Carrie and the kids were standing there waiting for me to pull in while we all just watched in dumb-founded astonishment as this car I thought was just pulling through proceeded to pull into my spot!

Such rudeness is not uncommon in the States, but inside I was seething and I didn’t know what to do about it. I didn’t “do” anything I regret, but fight-or-flight definitely kicked in. I wanted to chew the guy out or make some snide remark, but in what language? I let Carrie take charge and gave myself a time out while she and the kids took care of the vacuuming.

Had it been a normal day in Colorado Springs I might have vented a bit toward the guy, but I would have let it slide off my back a lot more easily and just laughed. As I’ve had a chance to process that event, I see that my reaction was definitely evidence of cultural stress. It had been a long day full of situations where the newness of everything and the language struggle made the simple difficult and the difficult just plain overwhelming. We were told there would be days like that and I’m grateful for that education.

The next time we go to the car wash I now know what to do. I’ll be quicker and claim my rightful territory! 😛

Thank you for keeping us in your prayers. We know this is a process and we’ll have moments like that at the car wash. It is only Jesus who is going to get us through this adjustment without us completely losing our sanity.