A Hint of Grain 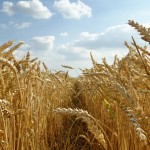 Last year Pastor Daniel at Mountain Springs taught about digging ditches. This was a profound message for us about preparing to receive the provision the Lord has promised. Imagine our surprise when this year Pastor Daniel returned to the same passage in 2nd Kings 3. This time he emphasized that now that those ditches have been dug, only the Lord can fill them. We’ve done the work, now comes the waiting on the miracle-working God who has promised to fill the ditches we’ve dug.

This year, the day before this message, the Lord brought me to Psalm 13:1 where David cries out “How long, O Lord?” I resonated with this verse because this road to Germany has been long. While sitting in the service the next day the Lord began knitting together 2nd Kings 3 and Psalm 13:1 and I heard a hint of the answer my heart longs to hear.

Backing up, let me summarize the setting and story laid out in 2nd Kings 3. Three countries (Judah, Israel, and Edom) were going to war with Moab. The three armies agreed to travel to war through a wilderness, but they didn’t bring enough water with them for the journey and their march came to a thirsty halt. The king of Judah thought to seek the Lord by talking to the prophet Elisha. After worship and prayer, Elisha told the armies to dig ditches to capture the flash flood water the Lord was going to send through the valley.

Have we not dug ditches? Has the Lord not promised the flood? Back to David’s cry, “How long, O Lord?” Here’s that hint of an answer: “Now it happened… when the grain offering was offered that suddenly… the land was filled with water” (v. 20).

I call this a hint of an answer because I’m not sure what it means or how it directly applies, but the answer is somehow wrapped up in the significance of the grain offering. Now I knew the grain offering existed, but I didn’t know much about it. After looking at Leviticus 2, a few other passages, and a few commentaries, here are some of my findings.

There were five ways to prepare the grain offering:

How Was It Offered?

In every case, the offering was brought to the priests where part of it was burned on the altar while the rest was given to the priests so they could feed their families. Most of the other sacrifices had similar provisions for the Levites. This was God’s plan to provide food for those that served Him full-time. In the days of Nehemiah the people had stopped this practice and were scolded for it (Nehemiah 13:10-12). Paul propelled this same practice to today in 1 Corinthians 9:13-14.

How Does This Apply Today?

As a whole, the grain offering represents a voluntary act of worship; recognition of God’s goodness and provisions; and devotion to God. The grain offering was involved in every voluntary act of worship and devotion to God, and it could even serve as the sin offering if the family was too poor to afford an animal sacrifice. Since this sacrifice was so pervasive it must have been important to the Lord. Since we no longer perform animal sacrifices, how can we practice the principal of this sacrifice today? Let’s look at the ingredients and see what we find.

Grinding grain into the required fine flour was not easy. It represented the daily grind of life—our work and efforts just to keep food on the table. We are to give out of our income and the necessities and provisions for life. That tithe they collect at church every Sunday is similar to the giving of flour—the sustenance of your livelihood.

The oil represents the Holy Spirit throughout Scripture. When we give to God what He was first given to us, it cannot be in or of the flesh. It must be in and by the Spirit of God. Everything that I offer to God must be with the Spirit, just as every version of the grain offering had to be with oil.

The biblical use of salt and what it represents is a very interesting study. Without going too deep here, we are called to be the salt of the world. Jesus is the one who preserves and provides flavor to the world. Without Him, this world would be bland at best and putrid at worst. However, He uses us as His agents of saltiness. This means that in our act of worship and devotion to the Lord as we offer ourselves as daily grain offerings we need to get out of our steepled salt shakers and interact with the world.

Four of the five preparations require the transformation that comes with heat. Heat represents the trials of life. Peter said it well, “Beloved, do not be surprised at the fiery trial when it comes upon you to test you, as though something strange were happening to you” (1 Peter 4:12). Jesus takes us as we are and then he begins cooking us to transform us into the people he meant for us to be. We are daily transformed by the highs and lows, triumphs and trials of this life. When heat is applied to a mixture of oil and flour the two become one and our work combined with God’s spirit becomes something delicious!

Aside from being one of the gifts the magi gave baby Jesus, frankincense represents prayer, specifically intercessory prayer where we cease praying for ourselves and instead pray for others. It is interesting that since frankincense is not ‘good eats’ it isn’t included in the offerings that are meant to be eaten. The sole purpose of frankincense is to fill the air with fragrance. This preparation only benefits God above. He delights in the prayers of his saints and has them ever before his throne (Revelation 5:8). About intercessory prayer, are you so concerned with the heat that comes with your transformation that you’ve lost track of those around you? As we’re the salt of the earth meant to interact with people, are we also praying for and interceding on behalf of those around us? I write this to my own condemnation for I know I’m guilty of being inward focused far too often. Let’s re-commit our lives to the offering of prayer for others.

Yeast and honey are not allowed in this recipe. Yeast always represents sin, so this is somewhat obvious, but what’s wrong with honey? Removing sweetness from the recipe removes man’s individuality and creativity. We’re not entering a competition here where one offering is better than another, thereby earning greater favor from God. We all come to God on level ground, none better, none worse. The point is that we come to God and give him our praise and worship.

There’s a good chance you’ve sampled the result of one of these recipes. One of them was likely used to bake the bread Jesus broke at the Last Supper. The grain offering represents Jesus’ body sacrificially broken for us. Just as the rest of the offerings were a shadow of something greater, Jesus was the ultimate grain offering. Jesus gave all of himself—his toil, tears, and sweat—representing the flour. He was filled with the oil of the Holy Spirit which He has so graciously poured out on all that believe in Him. He is the ultimate salt that He’s given to us that we might represent Him here and now. He faced the heat of the trials and temptations of this world without failure or blemish (Hebrews 4:14-15). The incense of prayer pervades the Gospels and He continues to pray and intercede on our behalf (Romans 8:34). Jesus was sinless and, according to Isaiah, He was common looking or even unattractive just as the grain offering was without honey (Isaiah 53:2). What a God we serve that ties such things together and binds them to Himself! Jesus is magnificent!

In 2nd Kings 3 the flood of provision came when they offered the Grain Offering. We can’t reduce this to a formula and pin God to the wall saying if we follow some program then God will have to send the flood and provide the last 30% of our needed support. However, I do know that God is moving on my heart to thank Him more for the provisions He has given. Should I wait until I have more than I need before I give all that I am? Do I stop giving when things are hard and the trials are here? Do I withhold giving because I need this or that instead? No! I give because I know that God cares about the “this or that” and that He’ll provide for those things because I have thanked Him and devoted my life to Him! In the end, all of it is His anyway, and I’ll give my life to yielding to Him voluntary sacrifices of praise and provision!

Has the “hint” revealed itself? No. But I’m more confident that the Lord is with me and more willing to sacrifice it all for the call He’s given us. I know the flood is coming. Perhaps you’re already part of it. God provides for His work through His workers. Some send, some go, the Lord gets the increase!