The room is dark. The only light is filtering in through shuttered windows, shielding against the harsh afternoon sun. By some standards, you would consider it a large room at about 450 sq feet (42 sq meters). However, about 10 families – 45 people – live here. Men, women (a few pregnant), teens, children, and infants are all crammed into a very small living space. This is only one of the 27 similar rooms in Moria, and the people living here are blessed to have it so good. 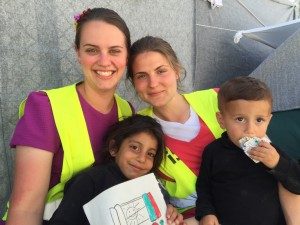 I walked into this situation blind, not knowing what to expect. I was so grateful for Sarah* and Wilhelmina* (the kids call her Mina). They’re both about 25-years-old, and they’re from a Mennonite church in South Dakota. They’re in charge of 9 of those rooms from 7AM to 4PM six days a week. What a blessing they are to this stranded and desperate community.

I had the chance to watch how these two women were so clearly like Jesus in this difficult place. Kids would run up and hug them. Women would kiss both cheeks. Men, some old enough to be their grandfathers, unquestioningly respected their authority. Young men wanted to marry them.

The monotony of their day is only broken up by breakfast, lunch, and dinner, with each taking about 90 minutes to distribute. I was there to help deliver both breakfast and lunch. I helped Mina distribute the orange juice while two others from my team helped Sarah with the rest of the food.

Let me just say that these little boxes of orange juice were like gold. The reason was simple. Do you like eating a meal without anything to drink? There were only enough juice boxes for the children twelve and under. The rest had to live on water from the tap that they didn’t trust, even though it was perfectly safe (I know it was safe because I drank about four liters without any, shall we say, “consequences”).

I lugged cases of juice boxes as I followed Mina from room to room. She knew where every family slept and how many kids each had. Even though, for order-sake, everyone was told to sit down, many kids would run up and give her a hug. Watching her interact with all these families made me think that’s how Jesus must have been making his way through the crowds. I felt more like one of His disciples – bewildered – as I followed in Mina’s wake. 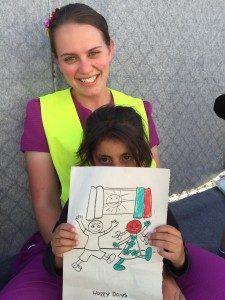 While Mina’s love was impressive, her ability to say “No” to the chorus of adults begging for juice was amazing. She did it with such graceful force without losing her temper. I think I was blown away by this because I don’t think I would have handled it nearly as well if I had to deal with the same characters day in and day out.

I am thankful I had the chance to watch such grace in action. I hope I learned a few things in the process. It is amazing to know that in the midst of such chaos and human tragedy, God has his servants quietly working behind the scenes as His agents of grace and love.